CVMR® is a privately held, metal refining technology provider that is also engaged in mining and refining of its own mineral resources in 18 different countries. The company was established in 1986, with its head office and R & D Centre in Toronto, Canada.

The rare-earth elements (REE) or lanthanoids (at times wrongly referred to as lanthanides) consist of 15 elements plus scandium and yttrium, which are not part of the group, but are included as REE, because they often occur in the same ore body. Therefore, in total there are17 REE. They are all very similar, almost indistinguishable, silvery colour and exhibit very similar chemical properties.

The principal sources of rare-earth elements are the minerals bastnäsite, monazite, and loparite and the lateritic ion-adsorption clays. Coal and coal by-products are a potential source of critical elements including REE with estimated amounts in the range of 50 million metric tons, in North America alone.

Despite their name, rare-earth elements are relatively plentiful. For example, cerium is the 25th most abundant element in earth’s crust, more common than copper. However, since they cannot be found in clusters that could be mined easily, they are considered quite rare. Some, such as Promethium, are radioactive and are generated as a result of decaying uranium 238, usually mixed with Thorium. Most REE are created by supernova nucleosynthesis.

China produces about 85% of the world’s REE, mostly as a by-product of iron mining operations in Inner Mongolia. Almost 95% of heavy REE are produced by China, including 100% of dysprosium. Currently worldwide demand for rare earth elements is exceeding their supply by 70,000 tons annually. This a major strategic /industrial concern for North American and European countries as uses, applications, and demand for rare-earth elements keeps expanding quite rapidly.

REE mines are often in countries where environmental and social standards are very low, causing human rights violations, deforestation and contamination of land and water.

Mining, refining, and recycling of rare earths have serious environmental consequences if not properly managed. Low-level radioactive tailings present a serious hazards and improper handling of these substances can result in extensive environmental damage.

Advances in the recycling technology have made extraction of rare earths from various manufactured materials more feasible. It is estimated by the USGS that about 300,000 tons of REE remain stored in used electronics, magnets, and batteries. France and Japan are the most advanced countries in recycling of REE.

Over the past 15 years, research and knowledge have evolved regarding the characteristics and uses of rare earth elements such that many of these materials have become indispensable in the manufacture of advanced technological equipment with a particular focus on clean-energy applications such as wind turbines and hybrid/electric cars. Most consumer electronic devices require REE and new technologies being developed for water purification, desalination, magnetic refrigeration, and more energy-efficient light bulbs will need REE as well. Canada currently relies upon the import of REE-containing components for the manufacture of key products in many industries. Thus, while the sector directly involved in REE is worth roughly $2 billion (130 000 tons), its indirect value throughout the global economy may be measured in trillions of dollars.

Rare earth elements are difficult to separate from one another once they have been liberated from REE-bearing minerals. At the atomic level, the lanthanide elements have a similar outer electronic structure, with this structure shielding the so-called 4f electrons within the atom. The presence and incremental filling of these electron orbitals are key characteristics of the lanthanides. This unique structure leads to REE ions that are very similar in size to each other. It is this similarity in ionic radii across the group, not the adjacency of their atomic numbers, which gives rise to the similar chemical properties associated with each of the REEs. This makes them difficult to separate, even with the use of intensive processes such as solvent extraction (SX).

CVMR has a proprietary process for recycling of REE.

The following Flow Sheet has been tested in many projects and its effectiveness has been proven many times. 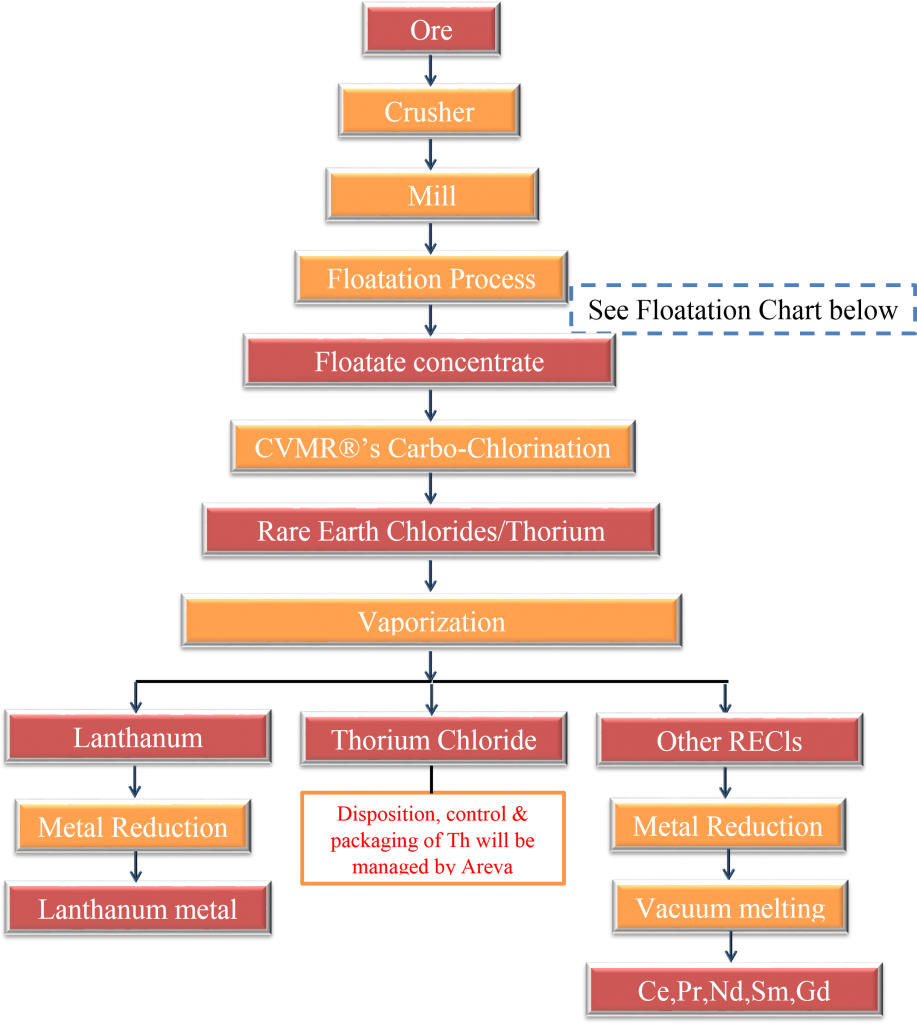 Mineralogy is the most important factor in rare earth processing as it controls the metallurgy. If the mineralogy is not well understood, then the metallurgy will be flawed and inefficient. Upfront mineralogical assessments can identify important mineralogical associations, in turn leading to correct metallurgical planning and providing early predictions in beneficiation test works. Despite more than 200 known REE-bearing minerals, only three are considered to be the principal REE mineral ores most feasible for the extraction of rare earth metals: Bastnaesite (Ce,La,Y)CO3F, Monazite (Ce,La,Nd,Th)PO4 and Xenotime (YPO4).

Considering the structural, morphological and compositional diversity of REE minerals, and the complexity of natural (e.g., weathering) and engineered (e.g., physical concentration) REE fractionation and enrichment mechanisms, mineralogical characterization is a key component at all steps ranging from exploration to production. Detailed characterization of the chemical, structural, textural, morphological, and surface properties of REE minerals within a deposit and a thorough understanding of the evolution of these properties are the basis for the identification of efficient concentration and extraction processes. 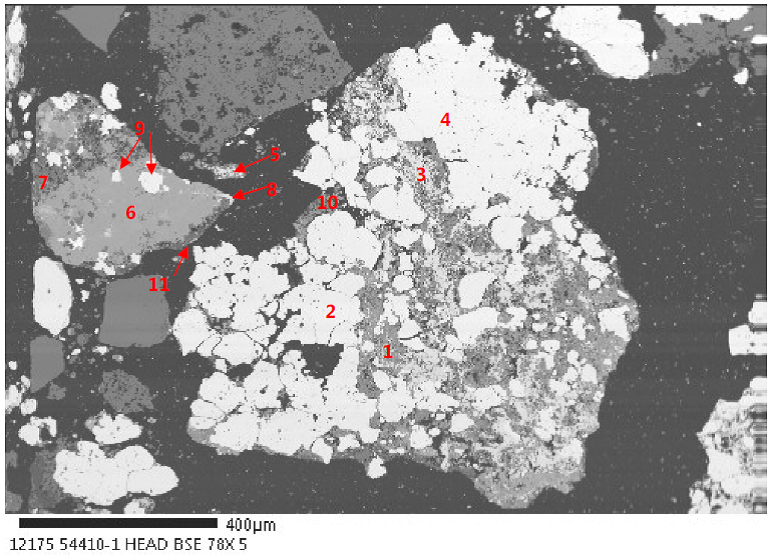 Direct chlorination process as a process for refining of REE goes back to Golschmit AG Process in Germany. In order to obtain an anhydrous RE trichloride product directly from rare earth bearing minerals, CVMR® dries the floatation end-product which was required for the concentration of the minerals. The REE concentrate is then chlorinated in a reactor producing REE chloride mix. The ore-carbon mixture is then completely converted to chlorides by gaseous chlorine. The chlorides are separated according to their volatility and then reduced by alkali and alkaline earth metals to their respective final elemental stages. Alkali and alkaline earth chlorides are also collected. All other reaction by-products are carried off by the off gases.

The energy cost is relatively low. The process yields anhydrous chlorides of REE without oxide or oxychloride content, clearly separated from impurities at a very high specific throughput. By this method we manage to remove 96% to 98% of the REE contained in the concentrate, after floatation, recovered as chloride. Chlorine consumption is usually 0.80 Kg/Kg of RE chloride. Energy consumption was 1 kWh/Kg of RE chloride.

There are several environmental issues related to REE production. The most significant issue is that many primary REE deposits contain significant amount of radioactive elements, mainly thorium and to a lesser extent uranium.

In 2015, CVMR® tasked the US branch of AREVA of France, one of the most prominent engineering firms – who have a long-term cooperation and Teaming Agreement with CVMR® and are world renowned experts in handling radioactive materials – to handle the radioactive elements of CVMR’s REE project in Turkey. 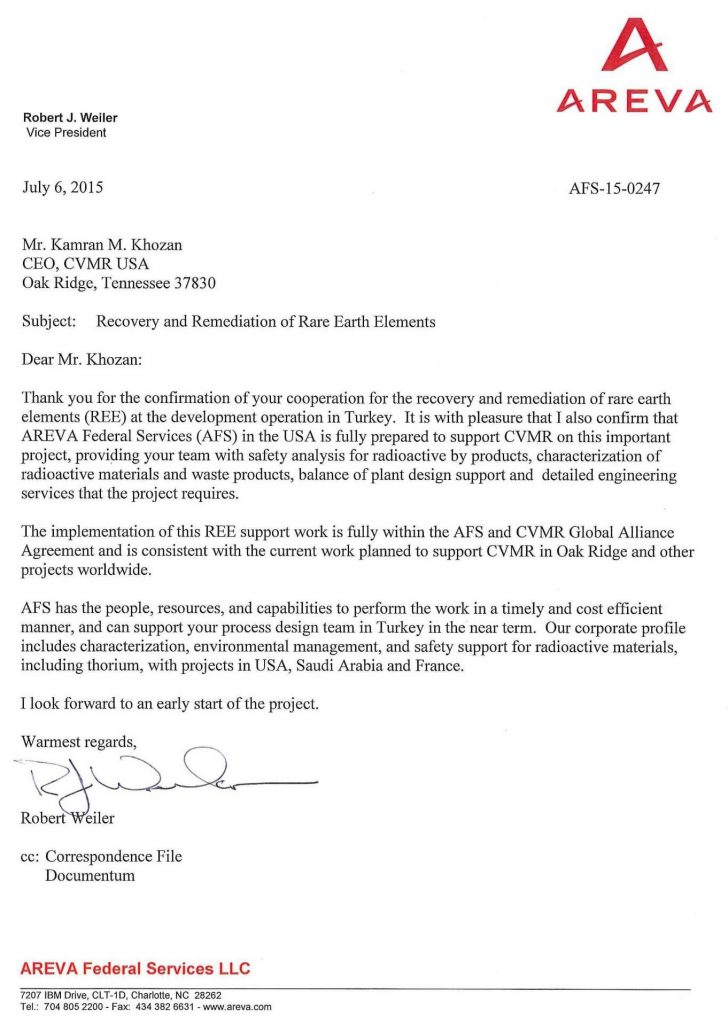